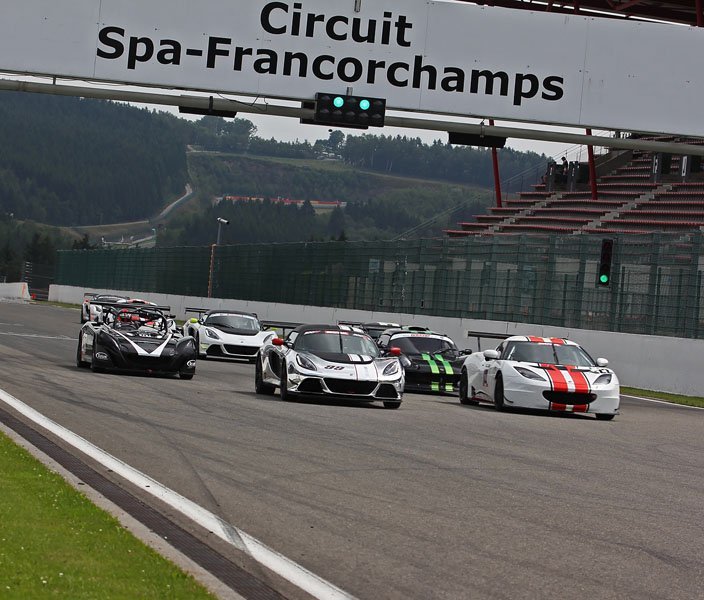 Round three of the 2014 championship marked the beginning of a Belgian double-header at the legendary Spa-Francorchamps circuit. With the second part taking place in Zolder in mid-September, it would also precede a two-month break for the drivers, and the chance to make an impression on the title race before the hiatus.

Jonathan Walker and Xavier Georges shared the title lead heading to Spa, with the former having dominated the opening three rounds, after problems for Greg Rasse’s Evora. However Andrew Wright was within striking distance in the Production class and with Jeremy Lorenco and Nicolas Ferrer also close behind, it looked as though Belgium would hold the key to the 2014 championship.

A visiting Jack Goff led in the early laps, before the V6 cars of Rasse and Nikolaj Ipsen took over at the top. Walker slotted into third, then it appeared to be stalemate at the top of the order.

Further back, Ferrer and Georges led their respective classes, whilst Wright and reigning champion Thomas Dehaibe disputed the Production pole. The fight was settled in Dehaibe’s favour when he lapped his favourite circuit over a second faster than his rival, who was unable to respond to this challenge.

Whilst the V6 cars dominated the top three, the rest were spread amongst the top 25 in the huge 41-car grid. The order became a little more fragmented at the very end of the session when Goff demoted Walker to fourth place on his final lap, then Rob Fenn dropped the championship leader another place.

Ipsen converted pole position into the lead at the rolling start and survived La Source to lead the early tours, however Goff was on his tail from the opening lap and soon passed the Exige. With the Englishman heading off into the distance, Ipsen was left to defend second place from Fenn, who was also making good progress at this time.

Jon Walker and Rasse held third and fourth, but the Evora pitted halfway through the race, much to the Belgian’s disgust and unable to rejoin, could only watch his rivals from the sidelines. However Walker joined Rasse moments later, and his crew began working on the rear of the car. Rasse offered commiserations to his colleague, but on this occasion, a tyre change was effected and Walker rejoined, albeit a long way down the order.

In the meantime Fenn had taken second place but he too was forced to pit, his team looking in the engine bay for an issue. This left Goff a long way clear of Ipsen and he finished the race 16 seconds to the good. Loup inherited third place, whilst Lourenco started behind team mate Georges, only to fight his way forward to fourth, heading Nicholas Walker and Thierry Verheist at the flag.

David Harvey, Olivier Cunat and Anthony Fournier completed the top ten, whilst in 13th place Denis van den Savel took the Exige class win after problems for Ferrer early on, and Thomas Dehaibe raced away from Andrew Wright to head the Production class.

Ipsen made another fine start, but right from the off he was under attack from Rasse, whilst Walker, Goff and Fenn passed Georges to launch their own assaults on the lead. Goff’s progress contrasted with that of Walker, who was losing time as he nursed his tyres.

However both Goff and Fenn would not be able to challenge on this occasion. The race one winner’s 2-Eleven cried enough after also having completing a 60 minute Lotus Cup UK contest over the course of the weekend, whilst Fenn’s woes continued.

In the meantime Rasse continued to work on wresting the lead from Ipsen. The pair pulled away from the rest, with Walker and Ferrer leading the chase. Rasse completed a successful pass, as Walker pitted at mid-distance for new rear tyres, leaving Ferrer to watch the leaders pull away alone.

Behind the top three, Lourenco led the 2-Eleven class, with Nick Walker, Loup and Laroche behind. Loup got the better of Walker, and the trio headed Georges, Jean-Baptiste Loup, Glenn Sherwood and J-P Genoux Prachex to the chequered flag.

Up front, Ipsen got the better of Rasse to retake the lead but pitted on the final tour with tyre trouble, once again on the rear left corner. There were no such troubles for Rasse, who was delighted to return to the top step of the podium after a difficult half-season.

The Production battle was another thriller, with Dehaibe and Bende fighting hard for the honours. The reigning champion held the early initiative, but Bende was equal to the task and they swapped the lead. Dehaibe’s attack went beyond the limits of the track, and he was given a drive-through penalty. However Bende was confused by the Marshal’s signal and took the penalty herself! Dehaibe pitted on the following tour and this handed Wright the class win, however he was also involved in the class lead fight, albeit a few tenths behind.

This weekend’s round was all about attrition, with tyre problems for many of the V6 cars on the high speed curves of the Ardennes circuit. Goff’s Open class overall victory ended the V6 stranglehold, but Rasse was able to overcome his troubles to take another win. Walker’s issues has dented his title aspirations, but he has a chance to hit back at Zolder in September, meanwhile Georges holds the championship lead, just ahead of team mate Lourenco.