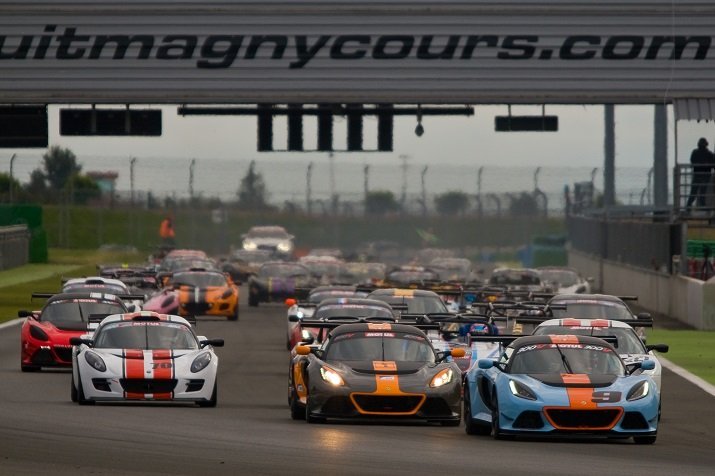 Following a breathless fortnight in which Lotus Cup Europe visited Paul Ricard in France and Belgium’s Spa-Francorchamps, the FIA International Series heads back to France for a return to Magny-Cours on 7-8 July.

Located south of Paris near Nevers, the former home of the French Grand Prix at Magny-Cours was last used by Lotus Cup Europe in 2015. This year it will be the second of three events in the country supporting the Championnat de France Camions, and is certain to provide a big crowd…and lots of air horns!

Magny-Cours is a very technical track with high-speed sections and tight corners. On Lotus Cup Europe’s last visit, then-reigning champion Jérémy Lourenço had just begun a five-race winning streak. Once that was ended, he took a further four wins in the season, but couldn’t prevent John Rasse from taking his first title. The Belgian, who was crowned again last year, will be determined to take his first victory of the season here. Rasse was thwarted by a drive-through penalty at Paul Ricard and a puncture last time out at Spa-Francorchamps, so will be hoping it will be third time lucky.

Rasse will need all of his experience and speed to prevent the Evoras from winning, however, with Hungary’s Bence Balogh having already chalked up three victories and taken the title lead, the most recent being last time out in Belgium. Britons Steve Williams and Jason McInulty have also taken the chequered flag this season.

There are plenty of potential winners in the V6 ranks, with Exige racer Tamas Vizin, the 2016 champion, chasing his first overall victory. Xavier Georges is on home ground and only then-teammate Lourenço could prevent him from winning a race on the last visit here, whilst category returnee Dane Nikolaj Ipsen was always in the hunt for victories in the past.

As ever there is a busy pack of 2-Elevens fighting for supremacy, with Christophe Lisandre the front-runner, but a combination of mechanical and driving faux pas have cost him a lot of points. Of the almost-exclusively French entry list, joint class title leaders Christopher and Franck Laroche, who share a car, and Anthony Fournier provide Lisandre’s key opposition, whilst Benoît Roger and Philippe Loup are also capable of challenging for category wins.

The all-British Open class has so far been dominated by the Series 1 Exige of Andrew Wright, who is 23 points off Balogh’s championship lead in second place overall. But reigning class champion David Harvey will be aiming to strike back in his 340R, whilst podium challengers Ian Fenwick (S1 Exige), Pete Storey and Matt Bartlett (both S2 Exige) will also be setting their sights on success.

There should be plenty of battles in the Production class, in which Sven Pettersson has taken the lion’s share of victories. Fellow Swede Cai Cederholm and Britain’s Mark Yates have also recorded wins, but Pettersson will be aiming to make inroads into the overall championship lead, of which he is 29 points in arrears.

As it’s a Championnat de France Camions event, there are three rounds at Magny-Cours. With up to three practice sessions on Friday and Saturday, all of them should have a good handle on a track many haven’t driven in anger for three years.