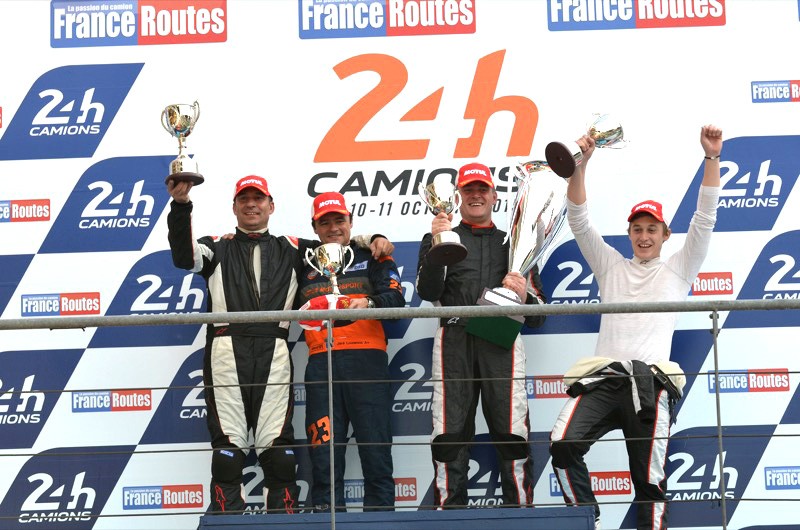 Gregory Rasse won the final Lotus Cup Europe race of 2015 at Le Mans last weekend (10/11 October), celebrating with brother John, who claimed the title despite missing out on a clean sweep of class victories.

Outgoing champion Jérémy Lourenço passed polesitter and team-mate Xavier Georges to win the opening two races on the Bugatti circuit, which were held during the 24 Heures Camions event at the famous venue. The French Exige Cup pair finished in 1-2 formation, with Belgian Gregory Rasse taking third in his Evora.

Rasse got his revenge in the double-points final race after a fantastic six-way fight that included England’s Jon Walker, who eventually finished third, his brother Nicholas, and Frenchman Philippe Loup. Lourenço finished second and his efforts were enough to take the V6 Cup class championship.

Christophe Lisandre (France) and Jon Packer (England) took 2-Eleven class victories in the first two races, but Jean-Baptiste Loup fought back from engine failure in qualifying to overcome Lisandre in race two and win the third to claim the class title. Meanwhile rival Lisandre suffered from a heart-breaking gearbox issue to finish well down the order.

England’s David Harvey took a hat-trick of Open class wins in his unique 340R, despite the best efforts of the Exiges of Nicolas Ferrer and Christopher Laroche, who took pole position at his local circuit. However, a more consistent run of results throughout the season was enough to hand the class championship to France’s Ferrer.

With a clean sweep of class victories heading into the final meeting, John Rasse was odds-on to lift the overall championship title, but failed to start race two with gearbox worries, which denied him a perfect run. With double-points on offer in the final race of the year he elected to save his car.

In Rasse’s absence, England’s Jason McInulty overcame engine failure in qualifying to claim the honour of being the only other man to take a Production class victory in 2015 after an epic scrap with Austrian Markus Nikowitsch, Swede Sven Petterson and Briton James Knight. Nikowitsch and Petterson finished on the podium, joining Frenchman Thierry Hedoin and Briton Mackenzie Taylor as Production rostrum visitors during the event.

A record 54,700 spectators attended the weekend, which was also broadcast live on the Automobile Club de l’Ouest‘s website. LoTRDC wish to extend their thanks to the ACO and all of the marshals for making the event possible.