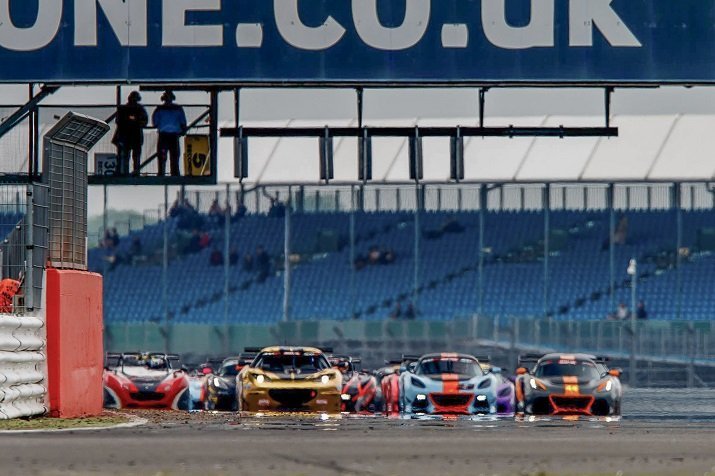 Lotus Cup Europe heads to the UK, home of Lotus, and a return to British Grand Prix venue Silverstone for the penultimate event of the 2018 championship on 1-2 September. Two British drivers will be aiming to top the podium once more, whilst home drivers are hoping to take advantage in the V6 and Production classes.

Last time out at Zolder in Belgium, local driver John Rasse won for the first time in 2018, and the reigning champion followed this up with a second victory on home turf. Title leader Bence Balogh will be out for revenge at Silverstone, however, and despite losing out at Zolder, the Hungarian maintained his comfortable title lead.

Zolder aside, the story of 2018 has been the domination of the Evoras over the V6 Class and the rest of the field for race wins. Balogh has taken seven wins, Williams two and Jason McInulty one so far, and the latter pair will be eager to win on home turf.

A 15-strong V6 Cup field includes the Exiges of Frenchman Xavier Georges, Hungarian former champion Tamas Vizin and Dane Nikolaj Ipsen, all of whom have the pace to challenge the front-runners. Look out too for Jason’s brother David McInulty, Belgian Lotus dealer Thierry Verhiest, plus Swedish pair Daniel Palma and Robin Nilsson.

The 2-Elevens have the potential to spring a surprise; indeed Christophe Lisandre took pole position at Zolder and has won races outright on occasion.  He also has ground to make up on class championship rivals Christopher and Franck Laroche, who share a car, if he is to add to his growing collection of 2-Eleven titles. All three should be getting stuck in amongst the V6 Cup cars along with Anthony Fournier in an almost-exclusively French group. The odd-one-out is Neil Stothert, another British driver looking for the home advantage at his comeback event.

The Open class has been dominated by Andrew Wright, but any hopes he had of the overall title were extinguished with mechanical troubles at Magny-Cours in July. Nevertheless, the Series 1 Exige driver enjoys a handy points advantage over David Harvey, who has the pace to win the class provided his 340R lasts the distance.

A further 11 cars will contest the Production class, which has seen some of the most exciting and close racing in the field this season. Four drivers have won races so far this season, and whilst Pettersson leads the standings, he’s had to work hard in the face of fierce opposition. Briton Mark Yates has been the Swede’s toughest rival, whilst Frenchman Thierry Hedoin and another Swede, Cai Cederholm have both been in the thick of battle.

The four race winners have all taken advantage of the newer Elise Cup R model, and former 2-Eleven competitor Jean-Pierre Genoud-Prachex from France joins them. There’s a contingent of Rover-engined cars including Britons Paul Pattison, Andy Dolan and James Knight, and they’ll be joined this weekend by Jon Walker, a formidable Lotus Cup Europe racer in the past, who has won outright in a 2-Eleven and V6 Exige.

This weekend’s race programme includes the International GT Open Series, Euroformula Open and the Alpine Europa Cup. The Lotus practice sessions will taked place at lunchtime on Friday, with qualifying on Saturday morning, plus the two half-hour races on Saturday and Sunday afternoons.